A Cow in the Water

A Cow in the Water 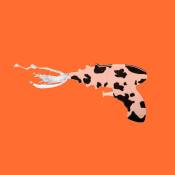 This will be a full A Cow in the Water show with guests Tony O’Diamond and Top Group Fantastic!

Hope you can join us in raising much needed funds and awareness for suicide prevention.

Biography
A Cow In The WaterFormed 1986 in Blarney they played their last gig in The Phoenix in 1995. The band were a major part of the Cork live music seen at the time and their main influences included Stump, Half Man Half Biscuit, The Fall, The Smiths, Johnny Cash and Madonna. Toured extensively over Ireland including the famous “The Acoustic Belly Button Tour of West Cork with the Henni Jimerix Experience supporting.Often played under the different name Of “Tony O’Diamond and Top Group Fantastic” the band were known for outrageous stage performances and lavish set designs (rooms filled with rubber cows udders for example!).Quirky songs played in their own unique style dubbed ‘mank rock’. Aidan o Connell fronted the band in his own inimitable style and the
band through its music managed to provide the appropriate backdrop to Aidans message.Aidan o Connell the imagination and driving force of the band sadly passed away in 1996 effectively calling an end to almost ten years of live performances.