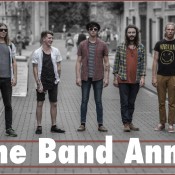 Just four short months after the birth of The Band Anna, the lads were picked up for a world tour as the official acoustic band for the legendary progressive rock singer/songwriter, Geoff Tate.

The mainstay of The Band Anna is their vivacious, infectious energy which always seems to leave their fans satisfied, yet wanting more.In the light of the ever increasing acknowledgment The Band Anna has received, they remain the same happy-go-lucky people that they all started out as.If The Band Anna could be summed up in one quote, it would be this one:”We just want to jam and have a good time.” – The Band Anna
Phoenix Street,
Cork City
+353 (0)21 427 8487
cranelanetheatre@gmail.com
View All Contact Details