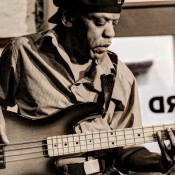 Formed as a backup band in case one of Inner City Blues were working on other projects. It features up and coming superstar guitarist Pierre Morrissey!

Morrissey hails from the great musical town of Killkenny.

Plays Harmonica, Guitar and does the occasional vocal with Bad Boy Blues

The senior Italian hails from Piza in the Tuscon Hills of Italy.

The finale piece of the puzzle is Bassist Jerome Rimson

As co-founder of Inner City Blues the Detroit Hit Man has lived in Ireland for over 33 years and brings the streets of Detroit into the music!

One thing is certain The Bad Boy Blues Band will have you on your feet!