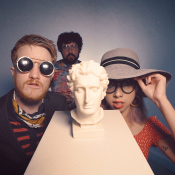 Portugal & ending in Ireland) collaborating with over 40 musicians creating, writing and arranging music for his upcoming debut album Portrait out September 20th; as well as contributing to his pieces drums, percussion, keys, vocals and lyrics. The music is a blend of Jazz, Funk, Neo Soul, Film Soundtrack and everything in

Collaborations with vocalists include the likes of Ophelia McCabe, Shaool, Kala Chung and Sara Ryan; to name a few. The project has been taken to the live stage with 8 to 13 piece ensembles; including various spots across last years Jazz

Critical acclaim for his previous releases include write-ups from Nialler9, Joe.IE, Hot Press & The Thin Air as well as extensive radioplay from stations such as Radio