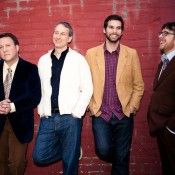 Carswell & Hope are a four-piece from Lawrence, Kansas. Limerick native NickCarswell arrived in the US Midwest in July 2011 with guitar in tow. Soon upon arriving, he joined with Jason Slote (drums), Dan Hines (bass) and Austin Quick (keys) to form Carswell & Hope. Nearly three years later the band have released their self-produced debut A Hunger, already hailed as “a breath of fresh air” (iheartlocalmusic.com) and “an audacious debut” (The Deli Magazine). Drawing from the world of The Beatles, Wilco and The Frames, the music is a blend of psychedelic, Pink Floyd interrupting Motown, and channeling Van Morrison.

Carswell & Hope are back in Ireland on a national tour for the release of their debut. Dates include Dublin, Limerick, Galway, Cork, Clonakilty, Dingle, Kilkee and Lahinch. The band will also join with members of The Elective Orchestra, the group Carswell performed with at home in Ireland and released the 2011 debut The Word, which the Irish Times called “sincere, heartfelt musings on love, loneliness and longing . . . Carswell speaks from the heart. It suits him.”