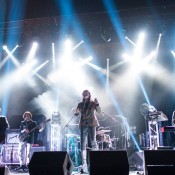 Time: 11:50pm
€0.00 Tickets Free Gig
View Video
Crane Lane Theatre Phoenix Street, Cork City, Cork, Ireland +353 (0)21 427 8487
Conceived in a Dublin psychiatric ward in 2012, the art rock quintet have always held an appreciation for the strange side of the human condition. ‘When we play, it’s a church. We preach, and people either get on board or get freaked out.’

In the wake of 2014’s ‘Mr Wednesdae E.P’ recordings, the Cult cloistered themselves within Tyrellstown’s Camelot Studios, to write and record their debut album, due for release later this year. With a sound that evokes equal parts of David Bowie and Jim Henson’s Muppets, Cult Called Man’s distinctive sound singles them out amongst a music scene that is increasingly relying on imitation rather than innovation to lead them along the path to success.
With standout performances at Electric Picnic’s Salty Dog and Trailer Park stages, along with appearances at nearly every major Irish Festival and a support slot with Anton Newcombe in Dublin’s prestigious Sugar Club, Cult Called Man stand poised to bring their live spectacle to an even greater audience this year.