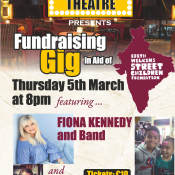 The tickets are only €10. All proceeds go towards the ongoing work of the charity founded 17 years ago by Crosshaven based veteran Third World nurse and worker Edith Wilkins.

The show in Cork’s most popular live music venue, from 8 to 11, will feature a raffle with fabulous prizes.

Since then, Fiona has been a highly recognized singer and guitarist on Irish television, performing regularly on TV and Radio shows including ‘The Late Late Show’. Her own one-hour TV special followed, and a performance with the legendary Kris Kristofferson to an audience of 50,000 in Páirc Uí Chaoimh got rave reviews. The Cork woman’s debut album ‘Crazy Love’, was nominated for an IRMA Award.

Fiona’s trademark versatility and warm rapport with her audience has seen her develop a great career as an entertainer performing either solo or with her band and her new album ‘The Beach’ is now on release.

Crosshaven singer and songwriter Billy Kennedy released his debut solo album ‘This Old Life’ to much acclaim in 2012. The Echo described his songs as having ‘a gentle poetic sensibility. Upbeat pop fused with Americana.’

Billy is much in demand producing and recording albums for other artists including Slovenian songstress Branka Bozic. Last year, he played concerts in Slovenia and Bosnia, as well as a sold-out show in the wonderful setting of Camden Fort Meagher, Crosshaven. ‘Giants’ the first single from his second album is due out this Spring.

Edith Wilkins Street Children Foundation India is a not-for-profit organization providing shelter, safety, health care, education, security and above all love, hope and a future for street children in the Himalayan district of Darjeeling in northwest India who are victims of poverty, labour, physical and sexual abuse.