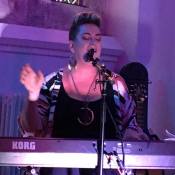 Formally the front woman of Fox.E and the Good Hands, Eimear released her solo album in late 2018 to great acclaim and has been enjoying touring it and playing theatres. Eimears music is all about the story, the connection, the audience and the communion between singer and listener. With soulful melodies, powerful vocals and great stories, this promises to be a great night. For more information and links to her music check out http://musibiz.com/eimear/