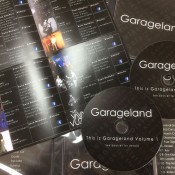 The Legendary Garage Gigs are coming back to The Crane Lane Theatre in Cork!

Doors open at 8pm / €10 on line or €13.50 on the door. online tickets are 25% cheaper than door tickets – this is to encourage sales through the artists own ticket link (see below) from which the artists are paid. Support your local band, make music great again!

Brand new to garageland, and a lot of excitement in the camp about this! The Finns are an alternative folk music duo from Ireland, brothers Hugh and Ciaran Finn. Their roots lie in traditional Irish music but their original songs have been described as alt-folk roots, or acoustic indie folk music, with strong hints of blues and rock. With banjos, guitars, percussion, tenor guitars and harmonicas making the live set very interesting and with their strong harmonies shining through, the brother vibe is very enjoyable to watch as they entertain very organically.

The Finns’ debut album, Creations, has been a huge success reaching No.1 in the Singer Songwriter Charts and a huge No.14 in the Overall Irish Charts in November/December 2018. Their upbeat and super catchy debut single, “Lambay”, catapulted them on to the Irish music scene. That was followed by their second single called “My Home Town” which was released May 2018. The third single was El Cóndor Pasa, an epic version and a musical journey of the well known Simon and Garfunkel song.

“Look out for these guys, they are really, really talented.” – Darren Holden (The High Kings)

Another exciting newcomer to Garageland for 2019, again causing a lot of excitement in the camp!Jake Kalilec is a singer songwriter from Youghal Co. Cork has been playing music since a teenager inspiered by lots of styles as in jazz blues folk and hiphop and has studied music in CSN music course and is studieing in Cork acdamey of music in north cork city present day.

Brand new to Garageland, Leo Mullane is a truly progressive artist who has always been interested in exploring his guitar through alternative tuning, creating new and interesting sounds. Leo’s trademark voice is full of emotion in the gentlest way. He brings a sense of calm to the listener and indeed the other musicians he plays with. This is also evident in his songs, which are forever exploring both the dark and light side of life. Leo knows how to liven up room with reggae beat and silence a room with his smoothing voice and lyrics. Leo would say that his biggest influences along the way have been John Martyn, Nick Drake and Mic Christopher but to name a few. However, at the young age of 21 Leo already is an accomplished musician, creating his own unique path with his music that will leave the listener hoping for more. Leo knows how to make his audience fell at home trough his lyrics, melodies and the intimacy of his voice.

Hailing from Youghal, Co Cork, Ireland. Leo has been steeped in music since childhood. Veteran songwriter Bobby Lee who became his mentor noticed his talent. Leo could be described as a star pupil as he wows every audience. He has played support to many established names including Declan O’Rourke, Freddy White. Blessed with a soulful voice and a masterful guitar technique, Leo‘s magic rhythms and richly textured flourishes ensure his star is rising. A debut solo album INASENSE is out now, check out his SoundCloud and Bandcamp to listen and to buy it.
Phoenix Street,
Cork City