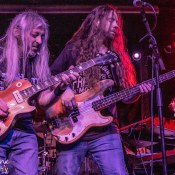 Pumping out his own signature style of spine-tingling blues and blues-rock originals along with blues classics Quigley style, best described as blues-inspired dreamy prog rock and mystical magical celtic blues.  Dublin guitar wizard Gerry Quigley and his band will at times entrance you and take you away to another world.

Quigley will mesmerise you with his eclectic collection of guitars and things with strings including his No.1, Gibson Les Paul to his Fender Strat, Telecaster, Dobro Slide, 12-string Acoustic, Gibson 135, mandolin and more including some seriously mad sounds from his one of a kind double-neck mandola/bouzouki named Shaun and Sheila!

With powerhouse Frank “Muddy” McNally rocking out on bass/vocals, and Sharon Quigley “Rockin’ Rev” on keys, and either Jimmy “Seamus” Howlett (UK) or John Adams (Ireland) on drums, Gerry Quigley and his band will entertain with a musical soundscape of guitars and other things with strings including his No.1 Gibson Les Paul, Fender Strat, Dobro slide, Telecaster, Gibson 135, 12-string Acoustic and more, along with some seriously mad sounds from his double-neck mandola/bouzouki named Shaun (Séan) and Sheela (Síle)!

If you love all the blues rock guitar greats like Gary Moore, Rory Gallagher, Paul Kossof, Peter Green, Jimi Hendrix, Roy Buchanan and more – you will love Gerry Quigley and his band.

You are in for a real treat – prepare to be captivated!