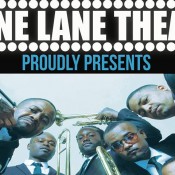 since the tender ages of 4 & 5 by their father, jazz trumpeter/band leader Kelan Phil Cohran (EARTH, WIND, &

of his children that had now become proicient in their musical presentation. The family toured the United

encompassed primarily elements of instrumental performance, the brothers were personally being exposed

to the music of their own generation (hip-hop, rock, reggae to name a few) and absorbed these components

into the cosmic jazz style of their father. By 1999, the band of brothers discontinued playing with dad in order

to ind their own sound and started going by the name of HYPNOTIC BRASS ENSEMBLE.

Author’s Award). Using street performing as way to broaden their audience and hone their famed & distinctive

band recording contract. Deciding to hold out for something better, HBE turned down the Def Jam agreement

the band’s indie success, but the group’s sound was best put by FADER magazine’s Edwin Stats “a huge brass

and the sweeping emotional scale of a Curtis Mayield blaxploitation opus.” Shortly after, HBE’s live show was

JAZZSTAGE at LINCOLN CENTER to SHEAPHERD”S BUSH in London. At the same time Hypnotic Brass Ensemble

itself inked an outitting deal with Dutch denim giant GSTAR RAW, and began their foray into international

BARCELONA, and the GOOD THE BAD THE QUEEN Victoria Park. Scheduling conlicts led to the eventual

as 110,000 (GLASTONBURY. ROSKILDE) and premiere music venues around the world

2009 (which later featured a song “WAR” on blockbuster movie HUNGER GAMES), HBE signed on with

THE AGENCY GROUP and set out to blow away audiences at WOMAD AU: BIG CHILL: NOVARRA JAZZ:

BERMUDA JAZZ FEST: PERCPAN in Brazil: POHODA in Czech Republic: COACHELLA: & many others.

The brothers were living in London when they recorded the GORILLAZ record with D.Albarn

earned a spot backing up PRINCE at the NEW POWER GENERATION FEST in Denmark the next year, coming

personally requested by THE ARTIST himself. Since then HBE has grown into an even newer sound with their