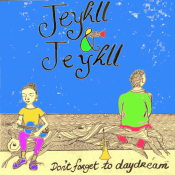 Jeykll & Jeykll are Irish songwriters and multi-instrumentalists Meg Cronin and Cathal Nally. The Duo released their debut EP “Don’t Forget to Daydream” this summer which featured on Irish National Radio and are delighted to be doing their live launch with full band (7 Piece) in the Crane Lane October 20th! J&J’s sound has loosely been described as a fusion of Jazz, Funk and R’n’B with shades of indie/space rock.