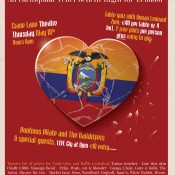 Earthquake information:
On Saturday April 16th 2016 at 6:58pm a deadly earthquake of magnitude 7.8 hit the coast of Ecuador in South America, followed by more than 200 aftershocks. This catastrophe has left the coast in a state of crisis leaving more than 600 people dead, more than 2,000 still missing under destroyed homes and buildings, and more than 4,000 people seriously injured. Thousands of people have been left without homes, water, electricity and food. Ecuador is known for its beautiful coastline where I have spent many of my summers with my family and friends and it is heartbreaking knowing that it has now become a place of pain and suffering. In an effort to help those affected all proceeds from the night will go to the victims of the earthquake.

Playing the length and breadth of the country to rave reviews for over 15 years, Pontious Pilate & The Naildrivers are now a nine piece ska explosion, complete with brass section.
The Naildrivers have shared the stage with such luminaries as The Undertones, Bad Manners and The Selecter and energize audiences playing the ska and punk music of late seventies and early eighties (and a few of their own besdies). Bands like The Specials, Madness, The Jam, and The Clash come to life in the hands of The Naildrivers.
The music they play can be described by many people in many different ways; ska, rock, punk, whatever, but at the end of the day it’s just good music that’s fun to dance and go wild to, as can be seen at any of their gigs, where both the band and the audience end up in a lather of sweat, smiles and satisfied exhaustion, each giving it their all. In fact, more often than not, the band end up in the audience!