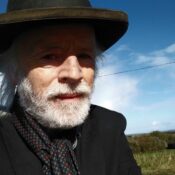 For many years, Cork singer/songwriter Ricky Lynch has been electrifying Leeside music lovers with the energy and vitality of his live performances; blending perceptive interpretations of Dylan, Beatles and other classics With self-penned songs, as vivid in their imagery as his output as an established and acclaimed visual artist.  Put simply, Ricky Lynch’s songs paint powerful pictures in the imagination of the listener.