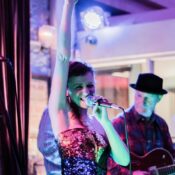 The Cork-based, five-piece group consists of a vocalist, drummer, guitarist, saxophonist and guitarist.

Colette Forde, a charismatic singer/actress/playwright/dancer/songwriter, fronts the band on vocals (Colette’s one woman play “Innit” was a hit show off-broadway in New York two years ago, she’s now working on writing/acting for film and writes many of the original songs in the band’s set) Colette previously performed as part of the “Pixie and The King” duo.