Stefan Murphy & The Athletes Of Soul

Stefan Murphy & The Athletes Of Soul 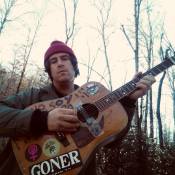 Stefan Murphy & The Athletes Of Soul [Saustex Records / US]

Stefan Murphy has been making music and touring in various guises for over a decade. With his first attempt at a ramshackle collective TMS [or the mighty stef] he made 4 records and toured the world incessantly from his home base in Dublin. Ireland before moving to Berlin in 2015. Whilst in Germany he formed his second wave project Count Vaseline which was more studio than live based churning out two very experimental albums in less than two years. Upon moving to the US in 2016 he worked towards taking the CV project on the road. He signed to Saustex, a texas based alternative rock n roll label in the spring of 2017, went on a 60 date US tour playing small clubs nationwide and releasing ‘Tales From The Megaplex’ a critically acclaimed slice of DIY punk that was 13mins long in its entirety.

Stefan Murphy did his first european tour [under the name Stefan Murphy] in January 2019 playing many sold out gigs in Ireland / UK and scandinavia and is returning to Europe in May and looking for dates.

The Athletes Of Soul is a concept based on inviting a different backing band or different musicians to play live depending on the region, city, and in some cases just depending on the show. Stef has collaborated with some really inspiring players using this format in the last few years so wanted to put a proper name on it. To date members of Black Angels, The Germs, Ariel Pink,  The Pogues, Reigning Sound, Ash, Altered Images, One Dove, Fontaines DC, Badlands, Republic Of Loose, Foxygen,Hickoids. Warbly Jets to name but a small few Athletes of Soul have been a part of the magic.