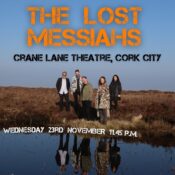 The Lost Messiahs-Connecting to the Real

The Lost Messiahs will release their third studio album Connected to the Real in January 2023.

There has always been a mystical spiritual connection in The Lost Messiahs music. On the first album they collaborated with the monks from Glenstall Abbey on their beautiful track Soulstar. They followed that album with Deconstruction of the Mind , an album  laden with songs that beautifully explore the inner workings of the mind in search for new meaning ,new direction. The production is rich laden with fat immersive synths and atmospheric guitars. Bands like Mercury Rev , Spiritualised, The National, War on Drugs have always inspired the band  with their similar rich atmospheric landscapes .

Their new single Searching in Mirrors continues this theme of spiritual searching but also captures the sense of frustration and isolation felt by a band who had just released a new album and were about to embark on an East Coast America playing at prestigious venues in New York/ New Jersey to promote it.

‘The dark days are always the worst days

And Tuesdays always are grey

He’s been staring at spiders for hours now

Trying to find the truth’

They have received excellent reviews to date  including a write up in the Sunday Independent by Barry Egan- ‘The Lost Messiahs have a distinct sound with echoes of Mercury Rev and The National’ . Their music has  been played by Dave Fanning, Dan Hegarty and John Creedon, RTE;have been playlisted by Radio Nova and many regional stations; and selected as song of the week on Joe.ie.

The Lost Messiahs are made up of experienced musicians who all have a rich musical pedigree in their own right.