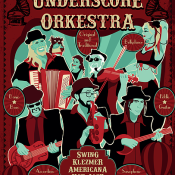 Now based in Cork Ireland, with members hailing from many corners of the globe, playing a blend of Balkan, Klezmer, Hot Jazz, Swing and Americana music, both original and traditional. Entire sets in each style can be heard or a nice melange of all. They are often joined by live Belly Dance. Their Performance evokes the old world and the new, the eerily haunting sounds from the east, with definite roots in the west. Influences are far and wide but range from New Orleans Jazz, to Eastern European, Greek, Turkish, Bulgarian, Roma and Klezmorim Music, Manouche Swing, to Acoustic Metal.

Guaranteed to get you up and moving!!!

They have been touring the US, Canada, Europe, Central America, Australia and New Zealand for the past 9 years. The Underscore Orkestra has taken many forms over the years and has traveled far and wide in many ways, including but not limited to: vegetable oil powered tour bus, planes, trains, boats, autos, driving and hitch hiking. Their favorite way is by bicycle, which they have done numerous times in Europe. They take on many forms, sometimes a full on performance group with 10+ members, dancers and fireworks, and sometimes in a sultry quartet, with style and all that jazz. Whichever form you see them in you won’t be disappointed,