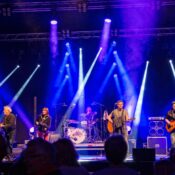 Award winning Irish group Two Time Polka play a fiery mixture of Cajun, Bluegrass and rock ’n roll music. They are not unknown to spice up their live performances with flavours such as tangos, east European tunes and a handful of politically insightful original songs.

With five albums to their credit, Two Time Polka has proven popular with radio stations receiving both national and international airplay. In 2005 they toured the US which led to the release of a compilation CD there.

In 2011 Two Time Polka were winners in the Best Musical Act category, awarded to them by AOIFE, the governing body of festivals in Ireland.