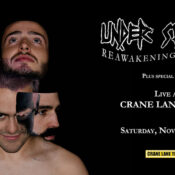 Under Starling are an alternative rock band originating from Dungarvan, Waterford comprised of brothers Danny (lead vocalist and guitarist) and Tommy Dunford (Drums, Vocals) as well as Colin Drummey (Bass) and Alex Pollock (Keys, guitar and vocals). The band had been gigging and releasing music under a former title of Cider Wasps and a different ensemble- this was changed to Under Starling during summer 2018 as the band entered a new chapter in their lives.The previous project saw 2 EP releases both titled ‘Here’ and ‘Ethereal’ which included singles such as ‘Lúnasa’ and ‘Hummingbird’ which were picked up by national radio stations.