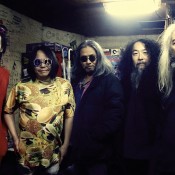 Bandicoot Promotions Presents: ACID MOTHERS TEMPLE THE MELTING PARAISO U.F.O.
(and subsequent offshoots) is a Japanese psychedelic band, the core of which formed in 1995. The band is led by guitarist Kawabata Makoto and early in their career featured many musicians, but by 2004 the line-up had coalesced with only a few core members and frequent guest vocalists. The band has released albums frequently on a number of international record labels as well as the Acid Mothers Temple family record label, which was established in 1998 to document the activities of the whole collective. This cosmic freak-out collective return’s with a brand new album “Benziaten” is an In C-style homage to the classic Osamu Kitajima record “Benziaten” (1973).  Acid Mothers Temple covers the title-track and reprise using Kitajima’s original composition as a departure point to explore the outer realms of AMT territory.  Further instrumental explorations reveal textures of the original composition while launching out further into the cosmic domain.  Numerous Acid Mothersoriginals are scattered in between.