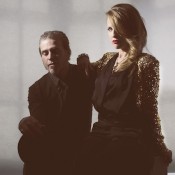 B & The Honeyboy, a deliciously rootsy duo comprised of ‘’B’’ ‘a real discovery, her voice filling your head with pure soul as she gets under the skin of the songs and sings them from the inside out’ (HOTPRESS) and K.J. McEvoy who ‘has a kick-ass full on guitar style for which the word gritty may have been specially coined’ (HOTPRESS).  Their sound is a rootsy stew of country soul with a rock n’ roll edge. One can tell that they have everything from Dylan, Bonnie Raitt, Nick Cave, to Lucinda Williams, the Cardigans and beyond in their record collection.  Fresh from this year’s Electric Picnic the duo will be performing songs from their