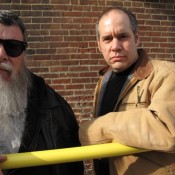 Although the band was formed in Boston, Massachusetts in 1995 and was based there for many years, Fisher moved back to his native California and has been living in the high desert since 2006. The ensuing years have seen numerous incarnations of the band.  “Ghost Republic” is the first album from Willard Grant Conspiracy since “Paper Covers Stone” (2009) and the first album of entirely new music since “Pilgrim Road” (2008) and was written and recorded in Massachusetts featuring the collaborative songwriting of Robert Fisher and David Michael Curry.

It is the subject of a hallucinatory group of collaborative poems written by a loose confederation of poets for a book conceived and organized by the California based poet and artist Nicelle Davis. Curry is the band’s principle viola player and a longtime musical foil for Fisher’s evocative baritone. The viola and other instruments that Curry plays on “Ghost Republic” offer terrific examples of his unique style that has made him a valued member of WGC during the history of the band, as well as a constant member of the Thalia Zedek Band, Hidden Tooth noise ensemble where he works with guitarist Chris Brokaw and his own Empty House Cooperative.

Over the last four years, Curry and Fisher have toured numerous times as a duo and the idea of doing a recording was born out of the simple success of those endeavors; the two have an easy immediacy between them and it makes every night a little bit different, rewarding both audience and musicians with one of a kind experiences.  In many ways, “Ghost Republic” is a celebration of this musical partnership. The most obvious expression of this is contained in the credits; the record was written, played and recorded entirely between the two of them in Curry’s studio in Massachusetts.

Ghost Republic: The book, the record and the film each stand alone but also make good companions. The road less traveled is sometimes better travelled with others.