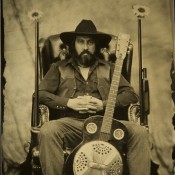 Brother Dege (AKA Dege Legg) is one of the best kept secrets in the Deep South; a musician, writer, workingman and heir to a long line of unusual characters born and raised in the southern U.S. Like the mad lovechild of Son House, Faulkner, and Patti Smith, Legg has burned a crooked trail to the Promised Land. Avoiding traditional career paths, he has spent as much time exploring the backwoods weirdness of his home state as he has forging his own brand of incendiary, “psyouthern” roots music. The journeys are parallel. Since the late 90s, Dege has pushed slide, resonators, and the deep south, kicking and screaming into the 21st century, melding elements of folk, Delta blues, punk, rock, metal, hippie ragas, and outlaw county into one blasted, raw whole.

Full of raging, dirt-earth pounding slabs of swamp heat, haunted redemption, and bell towers of experimentation, Brother Dege’s album Folk Songs of the American Longhair is a tour de force artwork that rages from barn burners to ancient Delta meditations to whirlwind slide-loop hurricances. Like the Delta masters, it is emotion-packed, imperfect, flawed, desperate, yet insanely alive and vibrating with an X-variable hidden deep in our human core. Recorded in a shed behind his house in Louisiana, Legg composed the ten original tunes in the slide-Delta tradition, painstakingly paying tribute to the old masters while tossing faux-retro, hillbilly hokum into the trend hopping dust bin that it belongs. Much like the field recordings of Alan Lomax, the album tunnels into the ancient mysteries of pre-war blues and its devil-obsessed masters. In a return to the crude basics, almost all of the tracks feature only one vocal, one slide guitar and one foot stomping. Folk Songs of the American Longhair could possibly be the Delta-slide, millennial reboot for generations to come.