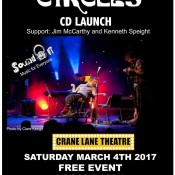 My name is Cillian McSweeney, I’m 27 years old, I have a disability called cerebral palsy which means I need an electric wheel chair to get around and I rely on eye movements to communicate. I am a musician and with the help of advanced technology like eye gaze and E-scape I am able to write and perform my own music.

In 2010 I met Grainne McHale, director of the SoundOUT, a Cork based community music organisation (www.soundout.ie). I sent her a letter saying I wanted to do 5 things; 1. Write my own songs. 2. Play my own music, 3. Be in a band. 4. Get a music qualification and 5. Get a career in music. It is 7 years later and I have achieved all of those goals with SoundOUT, apart from the last one, and I’m working on that!

As part of my studies with SoundOUT I became involved in a collaborative music project with the Togher Music Project in 2011. The aim of the project was to form an inclusive band between myself and the musicians working at the Togher Music Project and hopefully do some gigs and recording! I was assisted in this endeavour by SoundOUT music tutor Graham McCarthy. We called the group ‘Circles’ and over the past 5 years we have performed at a wide variety of events and venues throughout Cork including the Cork Opera House, Cork City Hall, The Firkin Crane, The Mad Pride Festival in Fitzgerald’s Park, The Curtis Auditorium in Cork School of Music, The Aula Maxima in UCC and The City Limits. We have been kindly supported by Music Generation Cork City and the Ireland Funds since 2013. We have also recorded original material which was created during the project. The CD of these recordings is being launched on the night

I like to perform music because when I do I feel equal to the other musicians and I don’t feel like I’m disabled. I’m releasing an EP of new music in the Crane Lane on Saturday March 4th where I’ll perform with my band, Circles. Support on the night will be from musicians Jim McCarthy and Kenneth Speight. There will also be some very special guests! I hope to see you there!”