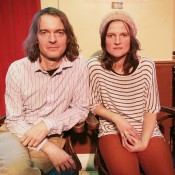 Following on from her acclaimed talent for moulding elements of jazz and folk with an indie-pop and country pastiche, comes a self-effacing and quirky collaboration bringing with it a new found confidence that has allowed Devon Sproule and Mike O’Neill to stretch into a new musical ground. The duo first met when O’Neill submitted a song to Low-Key Karaoke, a project in which Sproule splices videos of herself and others singing together to create remote duets. Sproule encouraged O’Neill to submit more and before long, they were writing songs together.

O’Neill credentials include winning the Gemini award for his compositions on food program ‘French Food At Home’ and is known for his portrayal of Thomas Collins in the TV show ‘Trailer Park Boys’.  American chanteuse Devon Sproule has four critically acclaimed albums under her belt. Performances include Glastonbury, Cambridge Folk Festival, Moseley Folk Festival along with sell-out performances at Union Chapel and the QEH. Tour supports include a plethora of legendary artists such as Richie Havens, Lucinda Williams and Bill Callahan.  TV appearances include Later with Jools Holland.