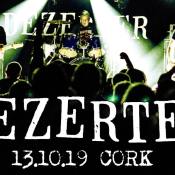 Dezerter is a punk rock group, formed in Warsaw, in May 1981. The band was originally called SS-20 (it was the name of Soviet ballistic missiles), for that reason the group was forced to change its name during Martial Law. After re-naming, Dezerter recorded an EP „Ku przyszłości” [“To The Future, 1983]. In 1985 two various compilation records featured Dezerter songs: „Fala” [“Wave”] and „Jak punk to punk” [“Let’s Have Punk”]. In 1987 Dezerter’s first LP album appeared in the United States, published by Maximum Rock’n’Roll, called „Underground Out Of Poland”, in Poland another album was issued too (in censored version) – „Kolaboracja” [“Collaboration”]. In 1989 there was yet another album – „Kolaboracja II” [“Collaboration ll”], and in 1990 „Wszyscy przeciwko wszystkim” [“All Against All”; published in Poland and France], followed by a two month tour of Western Europe (Switzerland, Germany, France, Netherlands) and Japan.

The band actively performs in Poland and many European countries (Belgium, Czech Republic, France, Germany, Great Britain, Finland) and in the United States.

Post scriptum
Throughout the years Dezerter’s songs appeared on many compilations and were used as soundtrack for several movies (including „Wałęsa. Człowiek z nadziei” [“Walesa. Man of Hope”] directed by A. Wajda and „Dom zły” [“Ominous House”] directed by W. Smarzowski).
In 1994 Paweł „Konjo” Konnak featured the Dezerters as the protagonists of his documentary film „Nie ma zagrożenia” [“There Is No Threat”].
In 2006 an album „Nie ma zagrożenia, jest Dezerter” [„There Is No Threat, There Is Dezerter”] was published, featuring Dezerter songs covered by several dozen different bands.