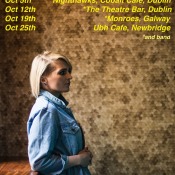 ELLYD returns after a busy summer with her new melodic pop offering ‘Ghosts’.
Following on from her successful upbeat single ‘With the World’, which reached number 6 in the iTunes charts, the Dublin native returns with this gentle singalong tune that gradually builds during its lyrical journey.
As well as releasing ‘Ghosts’ on Friday, September 27, ELLYD will also be kick-starting her Irish tour the following night of the 28th at Crane Lane in Cork. Following this, October will see Elly playing several dates around the country, including some with her newly formed backing band.
Speaking about the new single and her upcoming tour ELLYD said: “Ghosts is a song I think people will be able to relate to in some way or another. It is a little dark at the beginning but finds the light towards the end.”
“I’m looking forward to getting back out on the road to play new places and see new faces.
“I’ll be joined by my backing band for a couple of shows and i’ll be doing some intimate solo gigs too, a good mix, I can’t wait.”

*****
ELLYD (Elaine Doyle), who hails from West Dublin, has toured throughout Ireland and Europe and has played some of the biggest festivals and venues including Electric Picnic, Indiependence, The Dublin Quays Festival, Battle of the Lakes, The Ruby Sessions , Vicar Street, Whelan’s(One’s to Watch 2019) and The Button Factory. She has also supported some amazing bands and singers in recent months including Aslan, the Riptide Movement and Australian singer Olympia.