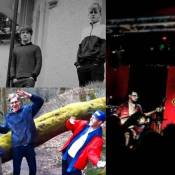 Brand new to Garageland, Brainwave is a three piece rock triplet form cork city. Formed in 2013, brainwave consists of Eoghan Creedon on drums, Garry Lynch on guitar & vocals, with Lukas Pikcilingis on the bass. First LP ‘Through Thick And Thin’ was released in 2015, with another ep in 2017. Described as a mix of guitar driven rock and antifolk, they enjoy playing music for fun and for the soul. We’ve also seen a sneak preview of their new material, and it’s Ace.

Sub Doubt is a 4 piece grunge band from Cork, Ireland. Playing together for 2 years the band consists of Sean Drury (Guitars, Vocals) Jay Russell ( Drums) Laszlo Meszaros (Bass) and Matthew Desmond (Guitars, Vocals). With influences such as Nirvana, Pearl Jam, Jimi Hendrix, The Ramones and Rage Against the Machine, Sub Doubt though in their early days have already shared the stage with acclaimed bands such as Pontious Pilate and The Naildrivers. Sub Doubt have released a self titled EP last November which is available on all platforms. The band is very eager to play gigs and have big things in store in the coming months and show no sign of slowing down.

Your advance online support really matters. Doors open at 7.45pm / online tickets are 25% cheaper than door tickets – this is to encourage sales through the artists own ticket link from which the artists are paid.
Upon hitting a small Ticket Target the artist is paid a commission on all online ticket monies, so you’re making a real and visible difference in directly supporting their music it this way. These earning increase significantly as ticket sales increase (up to 40%).
To see how the artists commissions work, and why Garageland is so popular with emerging artists, please visit www.garageland.ie/how-it-works/
To submit tracks for consideration for our radio show on RTE 2XM please send MP3’s to press@garageland.ie
Support your local artist, make music great again! Thanks, Garageland HQ
Strictly Over-18s, Garda I.D. required.