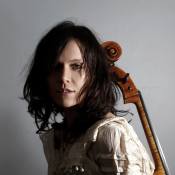 Gyda Valtysdottir has been active as a musician since her early teens when she co-founded the experimental pop-group múm in the late 1990’s. Leaving the band after the release of Finally We Are No One to focus on her further musical studies in Reykjavik, St. Petersburg and Basel, graduating with a double masters degree from the Hochschule für Musik in Basel where her main teachers were cellist and composer Thomas Demenga and violist, composer and improviser Walter Fähndrich.

Gyda has created music for films, installations, dance, among many other creative ventures, possessing a rare range of musical experiences which creates a unique alchemical compound. Her first solo album Epicycle was released initially only in Iceland through the historic Smekkleysa label, and received prestigious prizes at the Icelandic Music Awards.