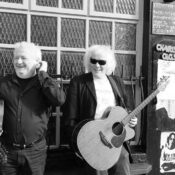 Rock & Roll, Bluegrass and Folk remain the foundations of the session but on the structure is an open house where many people have

joined in, singing along or simply soaking it all in.

The beauty of the session is that you can never be sure what will happen whilst Ray plays his mandolin and Hank plays guitar and sings as they pull songs from their never ending setlist.

The guests have had included John Spillane, Mick Flannery,

and Craig Chesler, Nashville’s Roni Stoneman Amsterdam’s Andre Van der Hoff and France’s Serge Desaunay… and pretty much every Cork based up and coming musician since 1994…

It took the declaration of a global pandemic in 2020

to quell the session When the insanity of that event

has subsided, all going well, you’ll see the reemergence of Charlie’s on a Monday night…