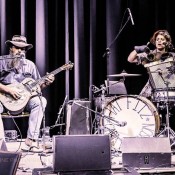 “Hat Fitz and Cara have the songs, the musical ability, the drive and the self belief to offer something refreshingly vibrant and new” Get Ready To Rock – Pete Feenstra

Hat Fitz is a “veteran” wild man of the blues scene in Australia. He has a record 18 straight appearances at Byron’s East Coast Blues and Roots Festival, a record that is not likely to ever be broken, and one which bears testimony to his amazing live performances and popularity with festival goers.

Cara draws on her soul background (she’s toured Europe and the United States with singers such as Jamiroquai and the hugely popular Corrine Bailey-Rae), and although blessed with a sensational voice she was not content to be labelled as ‘just a singer’. She has taken to drumming duties as well as washboards, flute and tin whistle, sometimes all at once.