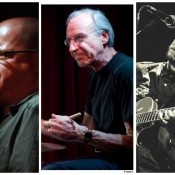 On February 7th next Jazz Improv! @ The Crane Lane will welcome the legendary Dutch drummer Eric Ineke. True European jazz royalty, Eric has a career that spans nearly 50 years, during which he has performed with some of the greatest musicians in the history of jazz, including Dizzy Gillespie, Dexter Gordon, Johnny Griffin, George Coleman, Al Cohn, Lee Konitz, Jimmy Raney, Woody Shaw, Pete Christlieb, Gary Bartz, Carmell Jones, Tal Farlow, Pepper Adams, Sonny Fortune, Frank Foster, David Liebman, and many others. Erik has also performed at numerous festivals in Europe (North Sea Jazz festival, Grand parade du Jazz in Nice, Pori Jazz), Canada (Toronto, Vancouver, Montreal), and the USA (Duke Ellington Conference Pittsburgh, North Carolina 1991 International Jazz festival, JVC New York). He can be heard on over 90 recordings, including five under his own name. He is Professor of Jazz Drums at the Royal Conservatory in The Hague, and is the author of ‘The Ultimate Sideman’, a fascinating book outlining his life in jazz and the great musicians he has performed with.

Eric’ swinging playing is legendary both in Europe and in the US, and his mighty beat has made him the first call drummer for some of the greatest players in the history of the music.

For this visit, Eric is joined by four of Ireland’s finest jazz musicians. Michael Buckley is without doubt Ireland’s finest saxophonist, with an international career and one of the most in-demand of all Irish musicians from people as diverse as the Mingus Big Band to Glen Hansard. Bassist and noted composer Ronan Guilfoyle is another Irish jazz musician with an international career. Over more than thirty years he has played with a who’s who of jazz notables including people such as Brad Mehldau and Joe Lovano. Chris Guilfoyle is an up and coming guitarist who though young, has already played with such jazz notables as Dave Liebman and Ralph Peterson and whose band Umbra was selected to play at the prestigious ’12 Points’ Festival in 2015, and the Jazzy Colours Festival in Paris. Trombonist Paul Dunlea joins the group for this CorK date.