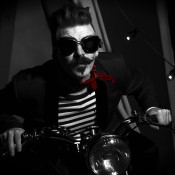 Jerry Fish celebrates Record Store Day (April 16th) with the release of a brand new single “Happy Dog” one of his catchiest + grooviest releases yet!  This double “A” sided single also includes “My Friend Jim” a monster mash up feat. Booka Brass Band and R.S.A.G.

To support the release of “Happy Dog” Jerry Fish will take his special brand of Rock n’ Roll and carnival madness on the road this April for his only Irish Tour this year. The “Happy Dog” tour will include 17 dates, hitting every corner of Ireland, including two dates (one early evening & one late night) in Dublin’s Sugar Club July 1st & July 2nd.

“He’s one of Ireland’s most enigmatic and entertaining performers to the point where the Electric Picnic have now afforded him his own stage at the annual event.”

“An indie legend and ringmaster of exceptional renown, Jerry Fish has evolved into a showman extraordinaire, alongside his new five-piece band including drummer Jeremy Hickey of R.S.A.G. they have captured the hearts of audiences all over, with their now legendary live shows ~ a unique live experience that dissolves all boundaries between performer and audience, not to be missed.”

With a career spanning two decades, the vaudeville moustachioed and ever evolving entertainer and songwriter, is no stranger to the open road.

Jerry Fish blasted onto the Music Scene in the 1990’s touring the globe as frontman of alternative rock outfit An Emotional Fish, the band who gave us the indie rock anthem “Celebrate”

Mr. Fish’s genre bending and idiosyncratic style of entertainment has made him a household name within the Irish Music industry.  With two Platinum selling solo albums, an MTV award and IRMA Music Award,

hit singles including “True Friends” and “Back To Before” and a reputation as a supreme and spectacular showman, is it any wonder that even after 20+ years, there is no sign of his illustrious career slowing down.