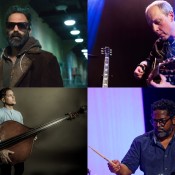 His long-time ally David Binney is one of the greatest saxophonists of our time, possessing ‘one of the most original minds in contemporary music’ according to Stereophile Magazine.

MOBO-nominated artist Michael Janisch (Joe Lovano, Lee Konitz) is an American based in London and one of the country’s most in-demand jazz bassists, and drummer Gerald Cleaver has contributed to many ground-breaking albums of recent years with artists such as Craig Taborn, William Parker and Henry Threadgill. A concert by modern greats simply not to be missed.