John Bramwell ( I am Kloot )

John Bramwell ( I am Kloot ) 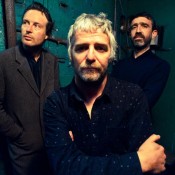 Supported by The Vals & Colm Fitzpatrick

This February John Bramwell front man and lead singer of I am Kloot embarks on his first Irish outing in nearly 7 years (since a sell out show at Whelans in 2008) with a very special intimate performance of nearly 2 hours of Kloot classics stripped to the bare bones. Also on the night The Vals (Acoustic set) will play support & Colm Fitzpatrick

History of I am Kloot:

I Am Kloot were formed from the ashes of The Mouth, a band co-fronted by John Bramwell and Bryan Glancy. Bramwell, who was born and brought up in Hyde, Cheshire, had previously played with bands including The Face Brothers (a band he was kicked out at the age of 18, The Ignition, Five Go Off To Play Guitar and The Debuchias, and performed solo as Johnny Dangerously. Peter Jobson moved from Morpeth, Northumberland to Manchester to study at Salford College (where he graduated with a BA Hons in Popular Music and Recording) and befriended Bramwell at The Night and Day Café, where they both ended up working for several years booking bands. Bramwell also ran an acoustic night at the venue called “Acoustica Mancunia” (and would continue hosting acoustic nights Gecko and Palookaville whilst the band got established. Jobson first saw Bramwell play at Castlefield Arena in central Manchester on 15 June 1996, the day of the IRA Bomb and ended up joining The Mouth who had released one single “Bang” the previous year,replacing the band’s original bassist Simon Burns. The band split with Glancy after he went on holiday a week before a tour and didn’t return for three weeks, began working on Bramwell’s songs and changed their name to I Am Kloot.

The band released their debut double A-Side single “Titanic/To You” in November 1999. The band released their second double A-Side single “Twist/86 TV’s” in March 2000 on Ugly Man before signing to Wall of Sound imprint “We Love You” to release their debut album Natural History in March 2001. Having decided against recording the album in the band’s rehearsal space in Jobson’s basement, it was recorded with Elbow frontman Guy Garvey in a church on the Isle of Mull.

Following two years of contractual problems, the band signed to The Echo Label and released their self titled second album I Am Kloot in September 2003.

The band released their third album Gods and Monsters in April 2005 via The Echo Label. The album was recorded at Moolah Rouge Studios in Stockport with Joe Robinson, who had previously worked with Badly Drawn Boy and Alfie.

In October 2006, the band released BBC Radio 1 John Peel Sessions, a compilation of session tracks that were recorded for John Peel’s BBC Radio One programme over two sessions in 2001 and 2004.

Without a record deal, the band began work on their fourth album at Moolah Rouge Studios in early 2006.

The band released their sixth studio album, Let It All In on 21 January 2013. In May 2013, the band announced their biggest headline show to date, which was held at the O2 Apollo Manchester venue in December 2013.