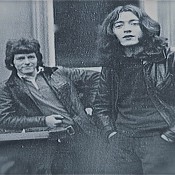 John Wilson is one of the most respected musicians on the Irish music scene. In the 1960s he was part of the first wave of Irish musicians to help put Irish rock and blues music on the worldwide stage.

John started playing drums way back in the early 1960s, these were the early days of the new beat groups. John played drums with one of Belfast’s most popular beat groups the MISFITS. While in the Misfits John was asked to join the Belfast band THEM.

Van Morrison and Them where the first Irish band to make an impact on the international scene, constantly gigging on the back of successful chart records. John played on “Mystic Eyes” and “Its all over now baby blue” and the album “Then Again”. These early days would set him up for the years to come.

After leaving THEM John returned to the MISFITS. On the back of their huge popularity in Belfast the Misfits made the move to Hamburg like so many other beat groups of that era. In Hamburg they worked both the Top 10 and the famous Star Club. On returning from Germany the Misfits spent some time in the north of England working the clubs and cabaret circuit. John was asked to return to Ireland to play for a couple of weeks with the band Derek and the Sounds from Omagh, after the two weeks they asked him to stay! An instant friendship with their guitarist Richard McCracken led to them leaving the band and forming the band CHEESE. Cheese spent most of the time working the London club scene, While playing with Cheese Richard and John where asked to join up with guitarist Rory Gallagher in his band TASTE, this was an offer they could not refuse.

Taste spent the next few years constantly gigging and touring and building up a massive fan base around the world. Successful albums, TASTE, ON THE BOARDS, and TASTE LIVE IN MONTREUX followed. Taste finally ended with their legendary performance at the Isle of White festival in 1970.

Both bands THEM and TASTE led the way for all the following Irish pop and rock bands that have followed over the years.

After TASTE John played in the band STUD working out of London and doing session work, at this time he was asked by his old friend Dublin musician Brush Shield to join him in the band BRUSH and then the reformed SKID ROW. Returning to live in Ireland, John returned to settle in his home town of Belfast. John spent the next 30 years working as a session musician playing, Rock,Jazz,Blues,Country and everything else ! with both Irish and visiting International artists, and many TV and radio shows and countless albums with many Irish artists. He also still found time to tour in the UK and Europe with Belfast band SKBOO and then THE BELFAST BLUES BAND.

On the death of his old friend Rory Gallagher John was asked to play some gigs playing the music that Rory had written in TASTE, so along with Taste bass player Richard McCracken and the Belfast Blues Band guitarist Sam Davidson they did just that. They play the music the way the play today and in a way that Rory pursued keeping it moving and growing and always trying to take it a little bit further !

John and Sam will be joined by renowned Irish session musician, bass player Nicky Scott.   Nicky has worked with Van Morrison, Mary Black, Brian Kennedy and many many more.

Like many other bands and musicians around the world they are helping to keep the music and memory of Rory alive.