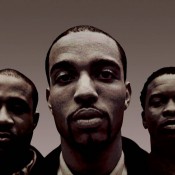 It’s hard to believe, it’s been Twenty years since the Jungle Brothers and their Native Tongues movement swept hip-hop off its feet. Twenty tumultuous years, some gloriously high, some depressingly low, but while others of their ilk have foundered and fallen by the wayside, the Jungle Brothers soldier on. In a genre where many talk of longevity, but few attain that level of durability; the Jungle Brothers have achieved just that without succumbing to passing fads that slide snake-like in and out of rap. They remain true to themselves and their beloved art.

The seeds that spawned the Jungle Brothers were formed during hip-hop’s halcyon days. With the bright graffiti on the city’s street corners, parks and trains as a surreal backdrop and Afrika Bambaataa, Treacherous Three and the Cold Crush Brothers providing the soundtrack, the JBs were religiously soaking up rap by osmosis. Rappers Afrika Baby Bam and Mike G met while attending Manhattan’s Murray Bergtraum H.S. and often hit block parties together. When the two MCs decided to enter the school talent show, they enlisted the spinning services of Sammy B a/k/a Sweet Daddy and, to use a well-worn cliché, history was made.

Paying their dues and proving themselves on New York’s unmercifully hard talent circuit, as well as doing promos with mentor and longtime friend Kool DJ Red Alert’s radio show, the trio amassed a respectable underground following. The JBs eventually decided to make the transition from talent show performers to recording artists. In a small studio tucked away in Coney Island, the Jungle Brothers produced the world renowned classic album

which spawned the titillating jams “Jimbrowski,” an affection ode to man’s best friend, and “Because I like It Like That” as well as the seminal hip-house single, “I’ll House You,” a huge European hit, which resulted in their first trip to Europe, where they were promoted by Jon Baker’s independent label Gee Street Records. On their triumphant return to the States, rather than rest on their laurels, the trio went back to the studio to record the groundbreaking “Done By The Forces Of Nature” (1990). On the Warner Brothers imprint, this time they enlisted a group of friends that were on the same creative wavelength: De La Soul, A Tribe Called Quest, Monie Love and

Queen Latifah. The result was the loose, but influential collective known as the … NATIVE TONGUES

While the album didn’t rack up the sales units everyone expected, creatively it is still considered a hip-hop classic with its positive, highly inspirational pro-black messages.

After a three-year hiatus The Jungle Brothers released “JBeez Wit Da Remedy”, which marked a change in direction for the JBs. Though the album achieved some success with the rough and ready “40 Below Trooper” the NYC based trio decided to step away from the plate and rethink their strategy. The demise of the JBs was never an option. Their last album, the aptly named, “Raw Deluxe”, a twelve-cut smorgasbord of beats, rhymes and good vibes aplenty, there’s much reason to celebrate.

“Initially, with Warner Brothers we jumped in because we saw gold. Getting there you realize the workings of a corporate label are nothing like an independent. We were four or five years with Warner, they spoiled us, then it was over. We made our mistakes, but we’ve learned from them.” Mike G continues, “What we have, the reason we’re still around comes from friendship. If we weren’t friends and were just doing this for the money, we would have broken up by now. For us being in the Jungle Brothers is all about friendship, we just kept our heads together and looked forward.”

If, as pundits claim, hip-hop is going through a creative crisis, the Jungle Brothers don’t seem to have noticed and it certainly hasn’t affected them in the slightest. As they step back into the rap arena, they are current recording new music working with some new producers for a new EP release in 2014. The JB’s are back in full effect.