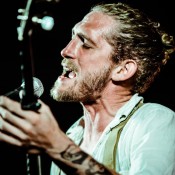 Morgan O’Kane is a phenomenon…raw and intense..he revives old heroes of traditional music while hypnotically channeling the heartbeat of the country. He’s like an oldtimer folk legend back from the dead. Morgan O’Kane plays banjo, percussion suitcase and sings sumpin’ fierce. Together with Ezekiel Healy, Ferd Moyse (Hackensaw Boys) and Leyla McCalla, they come from a deep and dark past of a not yet mapped out American mountain scene. O’Kane pays tribute to a simpler time in America’s history with craftsmanship and an unyielding passion that rarely seen in modern country, bluegrass, and beyond.Morgan O’Kane has released 3 full length studio albums to date. Aside from performing live and recording, Morgan has had multiple television and film placements. He has been featured and appeared in the FX TV show “Louie” (Louie C.K’s comedy drama) and wrote the theme song for WGN’s “Outsiders”.