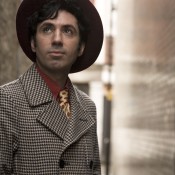 Country blues artist Pete Molinari was born into a large Maltese/ Italian/ Egyptian family in Chatham, Kent, where he was discovered by Billy Childish. Pete toured the USA for two years with a head full of songs and his trusty guitar. On returning home Billy Childish suggested recording his first album. It was recorded in a day in Billy’s kitchen live on an old Revox tape machine.

Pete was nominated for a MOJO breakthrough award at their awards for 2008, with “A Virtual Landslide” (his second album) listed in their top 50 albums of the year.  April 2009 saw Pete release his first new recordings since his breakthrough second album. A four track EP was recorded in Nashville, Tennessee at Playground Sound Studios all backed up by the extraordinary vocal talents of The Georgettes and the legendary Jordanaires!  Pete’s third album “A Train Bound For Glory” was released in 2010 and was also recorded in Nashville, Tennessee.  The album features contributions from  The Jordanaires, Chris Scruggs and The McCrary Sisters.  Pete’s new album is due for release in the coming months.  Produced and mixed by Andrew Weatherall, it also features Little Barrie from Primal Scream and Dan Auerbach from Black Keys with whom Pete has collaborated. Pete Molinari also has a song featured on the “The Lone Ranger: Wanted” album. This album, inspired by the film also features tracks by Iggy Pop, Iron & Wine, Shane McGowan and John Grant.