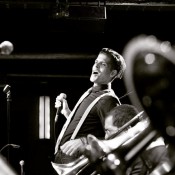 Acclaimed jazz vocalist Sachal Vasandani presents a compelling and fresh project showcasing the music of Nat King Cole and many other greats.

Sachal is recognized for his singular voice, with a tone and unique phrasing that mark him as one of the most compelling voices on the scene today.

When not leading his own groups, he has performed alongside greats like Wynton Marsalis, Bobby McFerrin,  Michael Feinstein and many more.  A frequent collaborator with musicians of all styles, he has two originals on pianist Gerald Clayton’s Life Forum, which was nominated for a 2013 Grammy.

As a singular singer-songwriter, Sachal has a sublime Okeh debut, the aptly titled Slow Motion Miracles. It’s a remarkable 10-track album of top-flight songs that are a sensual mix of celebration and wit. The songs move through like a fantasy,  fluid with heartbreak and discovery.

On Slow Motion Miracles, lyrics are a cause for celebration. He approaches typical themes- love, lust, heartbreak – with a rare balance of distance, wit, and a unique optimism.

The lyrics are set in a modern sound, steeped in a variety of styles- but ultimately,Sachal’s style is one-of-a-kind.The sounds envelop his rich vocals and serve his lyrics in a fresh and resonating way.