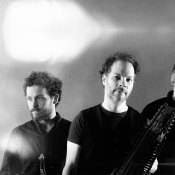 SLOW MOVING CLOUDS are a unique Dublin-based band who combine roots in Nordic and Irish traditional music with minimalist and experimental influences to create a sound unlike anything you’ve heard before.

Os was hailed in the press as ‘rich, intriguing and accomplished’ Jim Carroll (The Irish Times); ‘emotive, euphoric and unique music’ Steve Hunt (fRoots); and as ‘synthesiz[ing] disparate source material into something ambitious and new’ Daniel Neely (The Irish Echo).

In 2016 Slow Moving Clouds created and performed a new score for Teac Damsa’s Swan Lake / Loch na hEala, an adaptation of the ballet rooted in the Irish midlands, where – in the words of director Michael Keegan-Dolan – ‘ancient mythology and the modern world collide’.

The work premiered to critical acclaim at the 2016 Dublin Theatre Festival, with the music described as ‘a perfect mix of the earthy and the ethereal’ Fintan O’Toole (The Irish Times); ‘awe-inspiring and eclectic’ (University Times); and …’go[ing] from the liveliness of a céilí to the bleak solitude of a Bergman film’ Sophie Gorman (The Irish Independent)