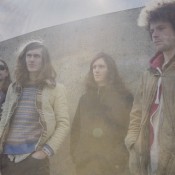 Canterbury psych-rock quartet Syd Arthur will tour Ireland this December. The band has recently finished a two-month-long tour of the US, and a headline tour of the UK in September/October. Produced by the band and mixed by Grammy Award winner Tom Elmhirst (Arcade Fire, Adele, U2), ‘Sound Mirror’ is included in MOJO’s Albums of 2014 (So Far) poll and the band won ‘Breakthrough Artist of 2014’ at this year’s Prog Magazine Awards.

‘Sound Mirror’s genesis began in late 2012 with the band traveling to Rother’s parents’ house in Ireland, their equipment literally in tow. They spent the summer laying the groundwork for the album before finally setting to work at their own Wicker Studios in Southeast London. Progressive in the truest sense, tracks like ‘Forevermore’ and ‘Backwardstepping’ evolve the archetypal Canterbury sound into a surprisingly heartfelt mutation of Arcadian acoustica and Syd Arthur’s own uniquely modern voice. ‘Hometown Blues’ – perhaps the most plainspoken song in the band’s increasingly rich oeuvre – was born of a 2012 collaborative session with avowed fan Paul Weller at his Solid Bond Productions Ltd. Studio.

“We were jamming and it just fell out,” Liam says. “Weller actually got my book out and read through it – that was pretty nuts. I nailed it, the essence of what I was trying to say.”

From the tantalizing ‘Garden Of Time’ to the prophetic ‘Sinkhole,’ ‘Sound Mirror’ expands and refines Syd Arthur’s already uncommon sonic multiverse into a brave new space where focus and concision is as essential as freewheeling abstraction and genre-shattering creativity. “The weirder stuff comes as naturally as the more traditional,” says singer/guitarist Liam Magill. “It’s all the same to us, really. Somehow everything filters through and comes out as us four guys and the sound that we make.”

Having spent much of the past two years on the road, ‘Sound Mirror’ echoes Syd Arthur’s deep connection to their home turf, its title referencing the massive concrete structures placed around coastal England to detect incoming enemy aircraft in the pre-World War II era. “They were the precursor to radar,” says Bush. “They’re very striking objects, basically facing out from England to France. We liked the idea of this mega mirror, reflecting out to the rest of the world from Kent.”

Syd Arthur’s determined search for quintessence extends into the album’s more experimental excursions. Songs such as ‘Autograph’ and ‘Singularity’ gambol around rock’s outer limits, their gear-shifting extremes counterbalanced by windswept melody and brilliantly crafted production. “I like to think we can get weirder and more poppy at the same time,” Bush says. “We want to reach a place where the songs can get tighter and more succinct and then when we go crazy, we really go crazy.” That unbridled spirit of transgression and forward motion defines both Sound Mirror and Syd Arthur, a band preternaturally unwilling to settle down, forever looking towards the far horizon.