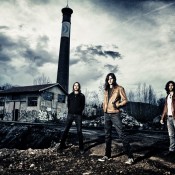 And then there were three. Gavin Dean on lead vocals, guitar, keyboards and harmonica. Ronan Lally on bass and vocals and Gari Keon on drums and vocals. Irish, made in Galway. Go get a map. There you go – it’s the one in the middle on the left. Across from Dublin, or not too far.

A few years ago, with a name like that, they would have been shelved with bands whose names were preceded by “the” and ended with the letter “s”. OK, not for long. With their post-Woodstock hairdos, they would have struggled to pass themselves off as indie rock hipsters dragging their idleness in whichever hip New York dive or loft.

But that’s the thing. The Deans is indeed a band of its times. No nostalgic sentimentality here. Yet they don’t disown the influences of the old greats, namely the blues because Dad had a large collection of albums in the genre (Gavin) and rural traditional music (Gari & Ronan).

Well, there’s also Nirvana and “Smells Like Teen Spirit”. “It totally changed my life!” Gavin exclaims. Same for Ronan: “I still remember the day I heard those sounds seeping from my sister’s bedroom door”.
A trio just like them, by chance… “It’s difficult enough to form a band of three, so best to avoid to do a quartet,” jokes Gavin, never one to miss a beat. Not surprising when he’s the one writing all the lyrics. “At the time [when the band was formed], we were quite into Cream. Maybe that explains it. A trio was much simpler in many ways. And above all, it worked! And still works.”

Musically speaking, what exactly are The Deans? What if we told you that it’s the million-dollar question? No? You still wanna know? Mind you, we could have guessed… the problem is that they cover their tracks so well. You’d swear they enjoy it. Rock? Folk? Pop? It’s all there. And plenty
of it!

You’ve already heard it a hundred times before, we know. Yet it’s difficult to say anything else about the guys other than they explode every style, genre and one-track mind, often to smithereens. Songwriting is their thing. It’s all about the songwriting, all about their duty to the songs.
This is even truer today, explains Gavin: “Before, we set targets, pressure like ‘If you do something bluesy, it really needs to sound bluesy.’ Now we don’t care. If we like the tune, if a synth in the intro brings something to the sound, we go for it. We ask fewer questions.

You’ve also heard it a hundred times before, but there is no other way of putting it: The Deans are a band that has matured. Quite comprehensible seven years after forming the band, touring relentlessly across the globe, sometimes in conditions that, like travel in general, broaden the mind…

A maturity that clearly allows them to keep their heads on their shoulders. An example? After two singles (“Worried All the Time”, “Subterranean Wanderer”) and an EP (Roomworks, Vol.1), and above all the success of “Lonely Like Me”, which allowed them to win the prestigious Unsigned Only competition in the United States, whose jury was composed of Iggy Pop, Tom Waits, Chrissie Hynde and Black Francis. they might want to move on to recording an album. “We’ll see in due time,” seems to be the general consensus.

So for now it will be a new EP. “Because an EP is more economically viable for us at this time, we’re not gonna lie,” Gari admits. “It’s not a problem of having enough material. With all the songs we have in store, we could do at least three albums. We’ll see what will happen in the future.”

Between the present and future, The Deans have enough to keep themselves busy. Luckily, that’s what matters most to them. “Playing in front of bigger and bigger audiences, to share our music with them, share a moment, an experience, that’s what we want,” Gavin says. “If we had to sum up our greatest wish for one purpose, one goal, that would be it.”

Sometimes things just fall into place naturally. Given the propensity of the band to tour, The Deans will be playing somewhere near you soon…