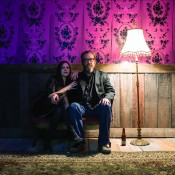 Ticket: 30 euro (subject to booking fee)Advance tickets available from Plugd Records, Tobin St, CorkLimited CapacityDoors: 7.30pmFor almost as long as they’ve been married (26 years) Brett and Rennie Sparks have written songs together (Brett, music; Rennie, words). Their finished work is never fully one or the other, but lives in unseen space between them. William Burroughs claimed he walked busy streets without being seen, simply by seeing everyone else first. This is similar to the Sparks’ approach to songwriting and why Rennie embraces her power to vanish. Invisible songwriters are happiest when their songs outshine them, leaving their creators unseen in the dust.The Sparks have released 10 albums since 1995. Their songs have been covered by countless people and well-known artists like Jeff Tweedy, Amanda Palmer, Cerys Matthews, Christy Moore and Andrew Bird (who released an entire record of HF covers). Guns ‘N’ Roses used, “Far From Any Road” as stage entrance music for a South American tour, and both Bruce Springsteen and Ringo Starr are fans. Decades into their careers, after winning the TV theme-show jackpot (a song they’d written 12 years earlier about fire ants and desert plants, a song now linked forever to a show about cops in a psychic swamp) – the Sparks still find their greatest reward in disappearing into new songs.Since 2001, Brett has made their albums in a converted garage at the back of their house. He recorded the new album and played most of the parts at night, with only hawk moths listening. The Sparks’ music is steeped in the western gothic of New Mexico life. The unseen is powerful here. Nothing rusts, but entire oceans have disappeared. Ski masks mean robberies, but in the slow dive of the sun, enormous bugs awaken in thorny yards and unseen sirens and coyotes cry out to the purple sky. Just about anywhere you stand there’s been some blood drawn.2016 brought the new album release of “Unseen” (on Loose Records). Each song on the record has a guiding colour – gold, silver, green, red, white. Rennie is also a painter known for her vivid and surprising use of colour, and she finds herself painting even when her brushes are made of words.The Sparks’ aren’t afraid to reveal their ordinary humanness. The invisible couple are also very happy to be seen.