THE HANDSOME FAMILY ( Sold Out )

THE HANDSOME FAMILY ( Sold Out ) 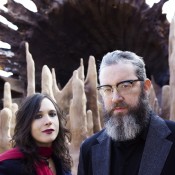 Their last album “Wilderness” (on Loose Records) explores the little-known enigmas of the natural world: immortal jellyfish, woodpecker tongues, dancing octopi, fly royalty, the secret language of crows, and mysterious ant spirals. Elsewhere we discover why the Sparks never take seaside vacations and learn all about compulsive window-smasher Mary Sweeney. It’s classic Handsome Family territory – twisted tales of the unexpected that may raise a smile but will also, thanks to Rennie’s knack for spinning a good yarn, leave you ever so slightly unsettled. Brett Sparks lays bear a succession of deceptively simple melodies and dexterous instrumentation that combine with his wife’s lyrics to a startlingly haunting effect and are delivered with a voice that glides between a Cash-like timbre and a southern high & lonesome plea.

The Handsome Family have been feted by the likes of Ringo Starr, Bruce Springsteen and covered by artists such as Jeff Tweedy (Wilco), Cerys Matthews, Christy Moore and Andrew Bird. In a career that spans twenty years they’ve toured the world in their own charmingly DIY fashion – one car, one hotel room, one stage…. night after night after night – and in that time they’ve performed as a duo, with a band and have had onstage collaborations with such folk-royalty as Eliza Carthy, country legend Charlie Louvin and indie-kings like Nick Cave and Jarvis Cocker. The Handsome Family also had the opening theme in 2014 for the “True Detective”, the television crime drama on HBO featuring Woody Harrelson & Matthew McConaughey.