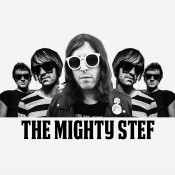 The Mighty Stef have an extensive touring and recording history and have what you might describe as a cult following in Europe and The US. 2012, however, largely seen a break in touring for the band to concentrate on writing the new record. A more ambitious musical landscape and the addition of an outside producer is pointing in the dierction of a very new and exciting departure in sound for this worldly group of Dublin men.

Sonically The Mighty Stef embraces the glory of rock n roll in all its forms. The storytelling nature of the songwriting, an often dark undertone and a constant march towards something rich and big and victorious. Notable references [some of which are also influences] include: The Walkmen, Arcade Fire, Band Of Horses, Fleet Foxes, Nick Cave & The Bad Seeds and Primal Scream.