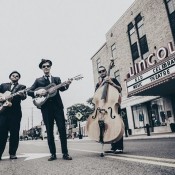 No stranger to fans of new folk music coming from all corners of the USA. Alongside artists like Old Crow Medicine Show and Pokey LaFarge, Woody Pines continues to forage thru the secret world of old 78ʹ′s and to write new chapters in the Anthology of American Music. Woody Pines belts out songs about fast cars, pretty women and hard luck with a distinctive vintage twang.

Woody was a founding member of the Kitchen Syncopators, a legendary busking street jug-band from Eugene, OR, that were one of the most exciting acts to emerge out of the West Coast folk scene in recent history. Since the Kitchen Syncopators disbanded years ago, Woody Pines has been writing and recording albums and performing for audiences everywhere, while co-founder of the band, Gill Landry, has gone on to join Old Crow Medicine Show.

Woody Pines brings that low-key street corner style of performance to his stage show, with all the polish and seasoned professionalism of a tour-bus-and-green-room rock stardom. If Pines’ elegantly-disheveled fedora and vintage resonator guitar don’t set the mood (both are strongly suggestive of the musician’s mix of ragtime, country blues, viper jazz and lightning-speed folk), the backing band does the trick. Pines, on stage, is an old soul and natural performer, storied and steeped in the best of Americana.